While you are already waiting in your seat for the plane to taxi away from the gate and get ready for departure, the pilot or flight attendants are often still making airplane announcements that contain cryptic technical terms. Hardly any layman can understand the technical terminology used during the flight. In this article, you will learn about pilot-speak during landing, as well as some routine airman-speak examples. Whether they serve as a command or simply as information for the flight crew: We explain below what aviation language abbreviations are all about.

What is the purpose of pilot language?

The technical language known as pilotese, or aviation jargon, includes codes, terms and designations that are commonplace in the everyday life of a pilot and aviation personnel. For travelers, on the other hand, they are sometimes difficult to decipher. But this important communication serves air traffic control and encompasses the entire field of aviation. Within this cosmos, there are also individual aviation language terms that differ between civil and military aviation. The globally agreed pilot language in international aviation is English. In addition, there are numerous Anglicisms that have also found their way into the German radio language. However, it is important that everyone internationally communicates in English to ensure smooth communication between all parties around the globe at all times.

Foxtrot Sierra Two Eight Five - the pilot's language also includes the aviation alphabet. It is also known as the ICAO alphabet. This international alphabet was introduced by the International Civil Aviation Organization (ICAO) as early as March 1956 to ensure good intelligibility above the clouds in the event of disruptions to radiotelephony. The ICAO alphabet provides words that are understandable in almost any language and is an essential cornerstone for communication. In this way, the Aviation Language ABC helps to avoid complications and misunderstandings in international air traffic between air traffic controllers on the ground and on-board personnel in the air.

After all, important information such as the flight number or the runway must be passed on during the flight. In the event of an emergency, abbreviations and technical terms help to summarize extensive definitions about the current situation in just a few words. In this way, the plane, including crew and passengers, can land safely. 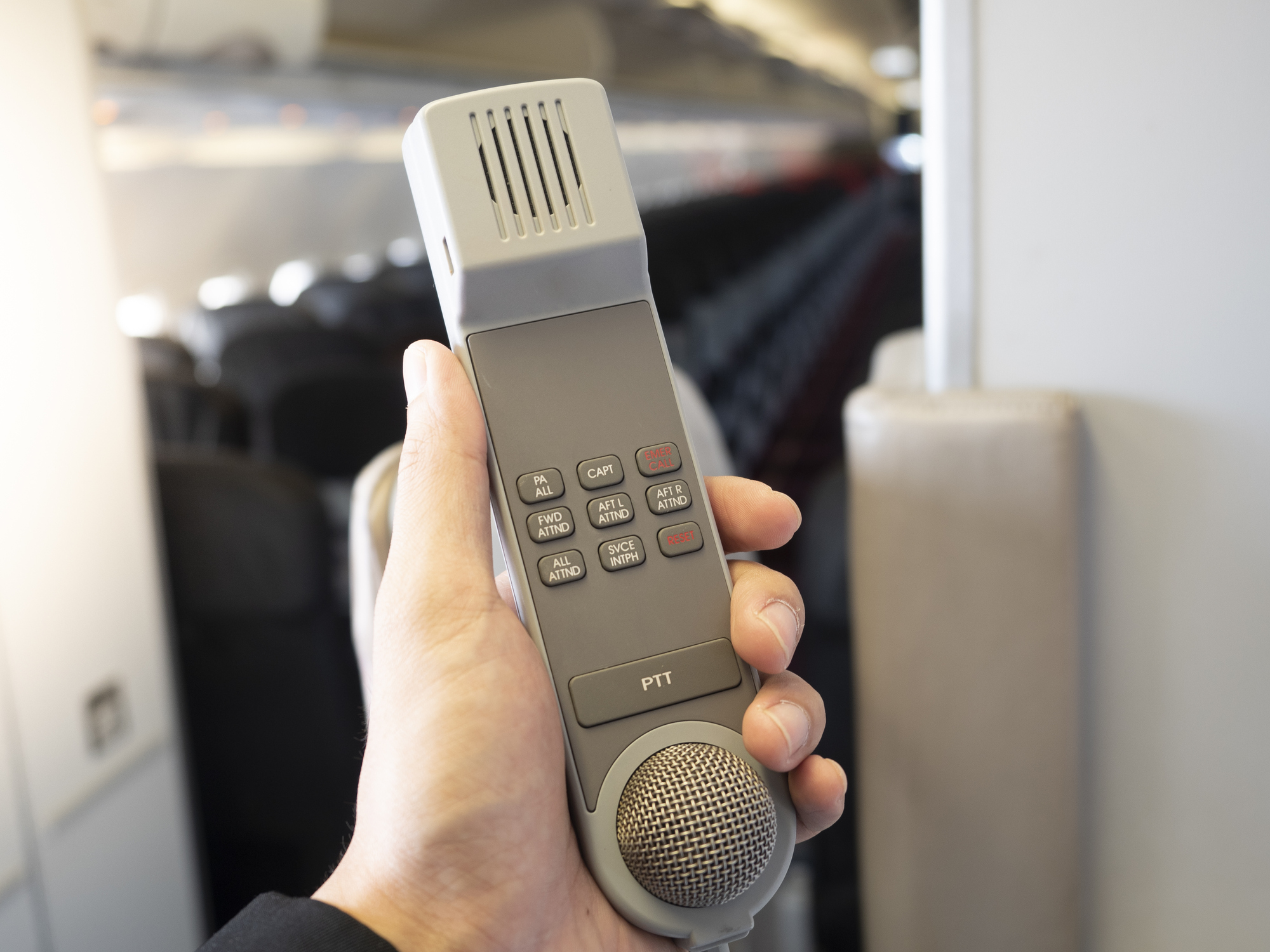 The language of flying - how the flight crew speaks 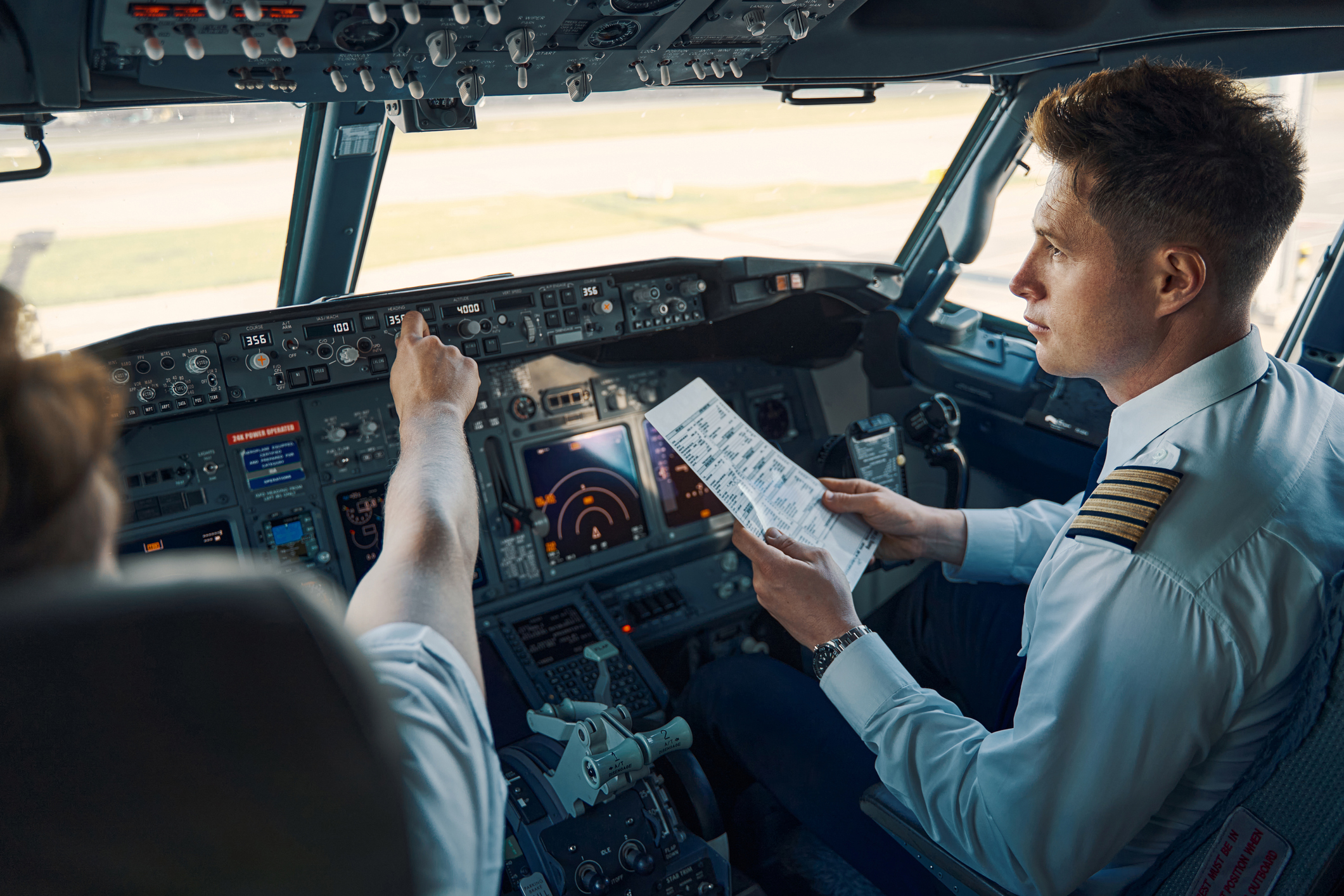 Pilot language: the announcements from the cockpit

All Doors to Arrival / All Doors in Park
After the aircraft has landed and is heading for the gate, an "All doors to Arrival" command is usually heard over the on-board loudspeakers. This command means in pilot language that once the aircraft has reached its parking position and the engines have been shut down, the emergency slides at the exits must be deactivated and checked by the flight crew.

All Doors to Departure / All Doors in Flight
On the command "All Doors to Departure" or also "All Doors in Flight", which is common in pilot language, all flight attendants, after the last passenger has boarded and all doors have been closed, set the selector lever of their assigned aircraft door from "Park" to "Flight". Thus, in the event of an evacuation, emergency slides or rafts are automatically deployed when the doors are opened.

Boarding Completed
"Boarding Completed" in aviation parlance means that all passengers are on the aircraft. This is the point in time at which you still can grab a free row of seats if the plane is not fully booked.

Deadhead
In pilot lingo, "Deadhead" means nothing more than that a pilot or flight crew is professionally on board the aircraft but not on duty. They usually fly along as passengers, for example, to take over an aircraft at the destination airport and begin their duties there.

Ditching
"Ditching" is a horror scenario that we hope you never get into. This term from pilot lingo refers to an emergency landing on water. But there's no need to worry! In our article How safe is flying? we show you what to do when you have a fear of flying.

Equipment change
In the case of an "Equipment change", often referred to as an "Aircraft change" in aviation jargon, the aircraft must be replaced due to a technical defect. This has far-reaching consequences for passengers, as it usually results in a delay in departure. The flight number remains unchanged.

Flight level-330
When the flight announcement "Flight-Level-330" is heard, it means in pilot language that the aircraft has reached the cruising altitude of 33,000 feet. This corresponds to an altitude of 10,000 meters. Usually, the captain turns off the seatbelt signs at this time.

Ground stop
Before takeoff or after landing, most aircraft cover a longer distance to the runway or parking position. Often, the pilot has to make a stop on the way there because, for example, a runway has to be crossed or the parking position is not yet clear. In this case, pilots speak of a "Ground Stop".

Holding pattern
Before aircraft are allowed to land, the tower must give the go-ahead to land by airman's voice. This may depend on bad weather, many takeoffs and landings at the airport, or other factors. If pilots make the "Holding Pattern" announcement, they must take the aircraft through a prescribed holding pattern until they are given permission to land.

In Range
If an aircraft must approach another airport due to bad weather or a technical problem, the airport must be "in range" in pilot-speak so that the aircraft does not run out of kerosene.

Jumpseat / Jump
"Jumpseats", often referred to as "jumps", are cockpit and flight attendant seats that can be occupied by stand-by flying personnel and their relatives if the flight is fully booked. The captain decides who is to be seated in the jump seat, although flying personnel of the captain's own airline always have priority and some airlines also require them to be in uniform.

Last-minute paperwork
"We have to do some last-minute paperwork and should be underway shortly". Passengers often hear this flight announcement before takeoff. In pilot-speak, this means that before the plane takes off, paperwork such as calculating the current weight and kerosene consumption must be completed.

This little insight shows that pilot language, with its commands, abbreviations and technical terms, is very diverse. Communication on board an aircraft is complex and absolutely necessary to ensure a smooth process for all travelers. Thanks to this practical form of information transfer, everyone involved can conscientiously go about their work without you, the traveler, noticing much of it. Perhaps you can already understand a few things on your next flight. Ready for Departure? We wish you a good flight!

We answer your questions about WLAN on the plane and provide useful tips for surfing above the clouds. ➞ Learn more now!

How safe is flying?

How safe is flying and how can flight safety be ensured? We take a look at the safety precautions ➞ Learn more now!

Attention globetrotters: Get more out of your next trip with a stopover flight!